I have recently had the opportunity of presenting my book chapter The Female Gaze in Times of Selfies as a member of the Feminist & Gender Research Reading Group at King’s/Queen Mary (Liss DTP). This chapter — part of the book Amalgama: Women, Identity & Diaspora— represents the culmination of what started as an arts-based research (ABR) project for my master’s dissertation. Having the chance of discussing my work with other feminist researchers and colleagues from the CMCI Department was a wonderful way of closing my first year of PhD. Moreover, the reading was just an excuse to start an exciting dialogue with all the members of the group around a diversity of topics such as female gaze, digital culture and the possibilities for feminist arts-based research. In the hope of moving forward this debate, I want to share some of the main ideas developed in the book chapter and in the project behind it: Kuña Jesareko.

As a social network, Instagram is a digital space for communication, but, at the same time, it is a place for representation. The project Kuña Jesarekobegan with the intention of using this platform in its two extensions -participatory and representational-, establishing through it a discussion around the concept of the female gaze.

Kuña Jesarekomeans ‘female gaze’ in Guarani, one of the two official languages in Paraguay, along with the Spanish. As the title may suggest, it aims to create a narrative about the Paraguayan female gaze, recognising the artistic value of the images shared by women from this country on social media. Understanding that the relations of looking are relations of power, the project was born as an attempt to empower Paraguayan women as creators of images. Then, relations of power are subverted by making them ‘not only the bearers of meaning but its makers too’, as Laura Mulvey (1989) said. And when they become the main topic, they inscribe diverse femininities, with different bodies, lifestyles, ages.

A central influence behind the original idea of the project was Paraguayan artist Regina Rivas. Her work on illustration reflects a fresh perspective of the female gaze, which found on Instagram the perfect platform to connect with a young audience craving this type of content. Scenes of sex, women in diverse roles and the female body itself are some of the themes that are continuously depicted by this illustrator.

After a discussion with Rivas about the best way to find creative work in Paraguay that fitted into the notion of the female gaze, we agreed that Instagram was the best space to establish a discussion around the subject with other practitioners. Then, we decided to launch a challenge for the 8thof March, the International Women’s Day (IWD), in 2018. To this purpose, we created a hashtag that summarised the intention of the project. The feedback was beyond our expectations: we found more than one hundred posts following #KuñaJesareko after the 8thof March. But this did not stop there, the project being an ongoing process: as I wrote these lines, the number of posts has reached three hundred.

The second part of the project involved gathering the pictures -or ´reposting’ them- on an Instagram account specially created: @kunajesareko. The third and final part was launch in the form of a blog (www.kunajesareko.org), with an online exhibition, and a series of essays about the female gaze. They examined what it means, how can be constructed, how it does challenge notions of femininity linked with national identity, and what is the role of self-representation and other ways of expression within the framework of digital culture.

For this purpose, I chose — as the curator of the exhibition — twenty-five images displayed in five thematic sections: ‘Through the looking glass’, about self-representation in a digital context; ´Kaleidoscopic identities’, regarding topics such as belonging, national identity and race; ‘The body as a manifesto’, gathering images that depict the body in a political sense; ‘Materialising female desire’, which is dedicated to images erotically charged; and finally, ‘Women looking at women’, where women’s portrays as the main topic were displayed. 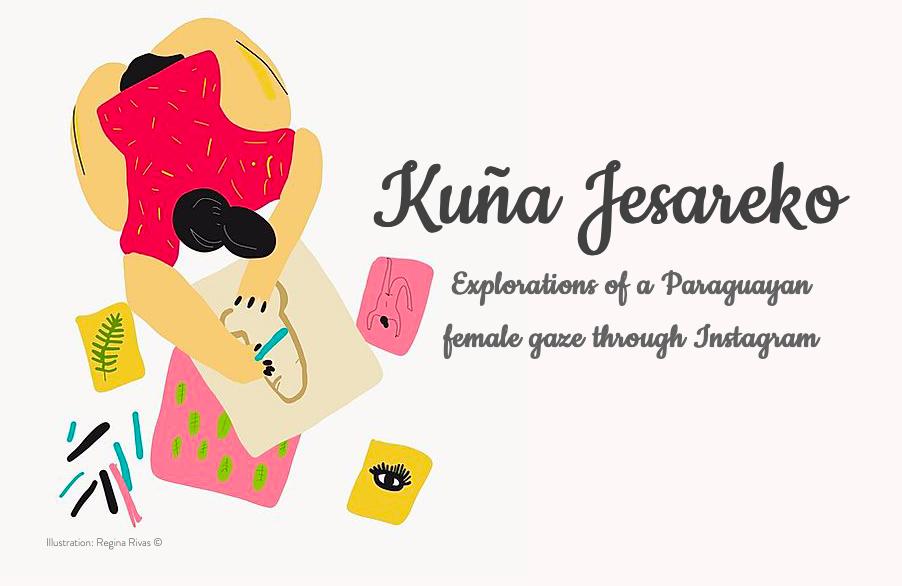 Almost two years after the first challenge was posted, a lot of things have happened. While the Instagram account became a digital community — still active — for gathering and promoting the work of Paraguayan artists, the project itself reached other spaces. In April, the slow fashion Paraguayan store Oh! Sí reunited Kuña Jesareko’s artwork for the one-night event Mujeres Mirando Mujeres(Women looking at women). In June, I could present the project in the University of Oxford, as part of the first Latin American Art and Cultural Research Symposium in the UK: Art + Identity. While in August was the launch of the book Amalgama: Women, Identity and Diaspora.

However, there are still numerous gaps to fill with further research. First of all, in terms of ABR as an innovative approach for contributing to academic knowledge while having a social impact. Secondly, Instagram, as a key modern site for the exhibition/discussion/contestation of images of femininity and the body, is an excellent medium to explore ideas through ABRP. I am excited to see how this dialogue between female gaze, digital platforms and ABR continues.