Protest has become a popular topic of interest in the national arts and heritage sector.  In the past year alone, The British Museum hosted I object, an exhibition dedicated to protest objects running from graffiti on a Babylonian brick to a recent anti-Trump Pussyhat. The Imperial War Museum celebrated peace activism in People Power, and the People’s History Museum commemorated the Peterloo Massacre with a Protest Lab encouraging visitors to design collective actions.

Some have called this a ‘social turn’. Here the myth of political neutrality is exploded, and heritage and arts practitioners embrace the challenges of a new ‘activist museum’ agenda. In this blog post, we talk to CMCI’s Dr Red Chidgey, Lecturer in Gender and Media, about their new book Feminist Afterlives (Palgrave Macmillan, 2018) and why there is an activist turn in cultural institutions.

Representations of protest are often considered negatively in the mainstream media, and have been conspicuously absent from galleries and museums. Why this resurgence in interest?

A cultural shift is currently happening: social movements have erupted across the globe tackling institutional racism, climate change and sexual violence, as well as a rise in populist movements. What is striking is how this activism takes place. Everyday citizens are getting socially involved, who do not necessarily identify as activists. Social media has facilitated this, of course. There is also an interest in ‘doing the right thing’, which has been picked up by brands in the creative industries. Within the arts and heritage sector, the focus rests on community collaboration and the need to represent broader demographics. Not only are we seeing more events around protest and activism, but cultural institutions are now offering exciting new ways for visitors and communities to act as agents and provocateurs within the museum space.

In your recent book Feminist Afterlives, you talk about the ‘restlessness’ of social movement memories. Can you tell us more? 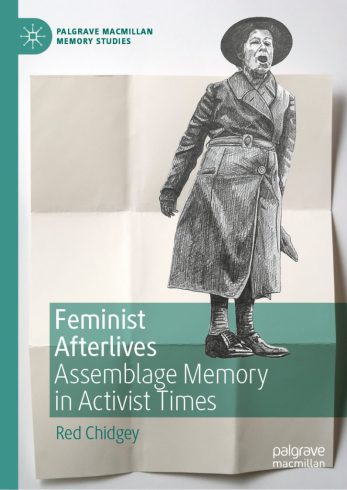 Rather than being disavowed, feminist activist histories – and their circulation in photographs, artefacts, and slogans – have been achieving a magnificent afterlife across public and digital spheres. A good example being the Edwardian militant Votes for Women campaign, which, as I was researching and writing the book, was experiencing a veritable popular memory boom.

I tracked these cultural memories across films, exhibitions, magazine articles, commodities, political speeches and contemporary acts of protest. By ‘restlessness’, I evoke the idea that history does not stay put: different actors draw on memory resources and put them to use in the here-and-now in unwieldy ways. Historically, suffragettes were seen as terrorists; today these campaigners have become exemplars of democratic struggle. Such histories are restless because they are endlessly undone and re-imagined. This is how collective memory works: its key emblems and narratives must be picked up, re-energised, and put into conversation with the urgencies and demands of the present. All the time telling partial, interested stories.

The protest momentum within the arts and cultural sector doesn’t seem to be winding down. What can galleries and museums do to strengthen their commitment to activism and social justice?

A few years ago, Sharon Heal, the Director of the Museum Association, suggested bravery, passion, empathy and activism as core values the museum sector should embrace. Last spring, I organised an event at King’s around ‘Curating Protest Memory’, which brought together activists, curators and archivists from Tate, Platform, Bishopsgate Institute, Queerseum, and other institutions. We discussed these challenges and came up with some recommendations. Most importantly, it is not enough for museums and galleries to curate temporary exhibitions around activism. There is a demand, coming from activists and workers most strongly, for cultural organisations to demonstrate a social mission throughout their operation – whether this means relinquishing corporate sponsorship from major oil companies, or ensuring cleaners and front of house staff are paid a living wage. There is also an appetite for cultural institutions to engage with current activism rather than presenting an archival and aesthetic version of settled movement pasts.

I am co-investigator of an AHRC-funded network called the Afterlives of Protest, which is holding its final conference in September 2019. Students and researchers can tune into live tweets at @protestmemory as we document debates and discuss actions. The key point is that memories of protest cultures are not just mementoes of a distant or fleeting past. These cultural reminders can, ideally, provide a tool-kit in creativity and strategy for actively labouring for a just society. And through institutional and public recognition of protest past and present, we affirm the kinds of cultural values required for more equitable futures.