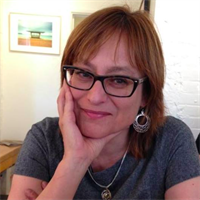 Working with Naomi Sakr and Christine Singer, the project’s consolidated report, which features recommendations, workshop briefings and a full list of programming samples, and is available here: https://kclpure.kcl.ac.uk/portal/files/102210294/Consolidated_Report_FinalSV_221018.pdf

Jeanette (pictured) and her team have also published a report on the proceedings of their symposium “Invisible Children: Children’s Media, Diversity, and Forced Migration” which took place here at King’s earlier this autumn. You can download it here: https://kclpure.kcl.ac.uk/portal/files/102211493/Symposium_briefing_140918.pdf

Although the reports wrap up the funded part, the project website at  https://euroarabchildrensmedia.org/ will continue as a resource for project findings. Here, you can access their first report from the Manchester Children’s Global Media Summit, their second report from the CPH:Dox festival in Copenhagen on children’s factual content, their third report from the Prix Jeunesse festival in Munich on drama and storytelling, and their Project Report to Stakeholders, which summarises the findings of the project.