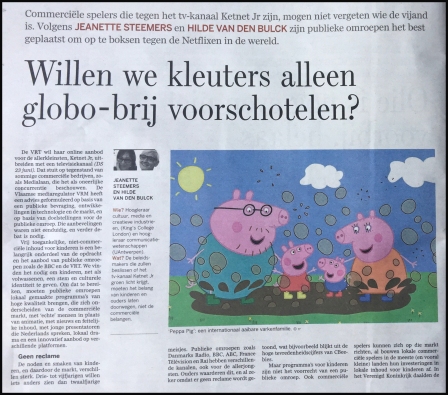 There’s not many people can combine Peppa Pig and Parliament with such authority, but CMCI’s Professor Jeanette Steemers continues to fly the flag for the academic study of children’s media, and especially television.

She joined up with with ”Teletubbies” creator Anne Wood to appear on BBC Radio 4’s popular “Woman’s Hour” programme with Jane Garvey , asking why so much of our current children’s TV is not British made. You can listen again at: http://www.bbc.co.uk/programmes/b08x4rhq

Recently she also chaired a session on policy at the Children’s Media Conference held this year in Sheffield. See http://www.thechildrensmediaconference.com/blog/2017/07/05/report-are-we-open/

Next up: Jeanette attends the Save Kids’ Content: a leap forwards for British children’s television event at the Houses of Parliament.