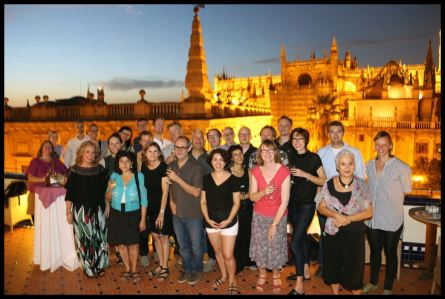 CMCI Senior Lecturer Dr Paul Sweetman is back from Seville, Spain, where he took part in the Fifth European Colloquium on Culture, Creativity and Economy (CCE5).

Organised by colleagues at the Universities of Stockholm and Uppsala, and co-sponsored by the Swedish Research Council (Vetenskapsrådet) and Knowledge Works (The Norwegian National Centre for Cultural Industries), the colloquium took up and continued an international and interdisciplinary debate on culture, creativity and economy originally initiated during a workshop in Padua in 2011 and subsequently given an institutional character as a European Network of Excellence during colloquia in Uppsala in 2012, Berlin in 2013, Amsterdam in 2014, and Florence in 2015.

As well as presenting a paper on “The Cultural Economy of Subcultures”, Paul also took part in a panel discussion on “The Individual and Subjectivity in the Creative Economy”, where he talked about his current work with CMCI’s Dr Jo Entwistle on appearance amongst creative workers, and his developing project with Professor Dominic Power (Stockholm) and Professor Atle Hauge (Lilihammer) on subcultures and creativity.

Paul and his conference colleagues are pictured against an impressive Andalusian skyline by Hang Kei Ho.