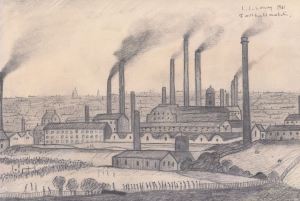 Dr Richard Howells, our Reader in Culture, Media and Creative Industries, appeared on national television talking about fake works of art available over the internet. The programme was BBC1s popular “Fake Britain”, which turned its attention to the art world –and especially the consumer end of it that operates on “popular internet auction sites”. Dr Howells talked about his own collection of drawings by LS Lowry which he has assembled over the years genuinely believing them to be shameless fakes. Regular readers of the CMCI blog will remember that he published an article on a similar topic in The Times Higher Education last year. Editor’s note: The image above really is a fake!