Topics discussed during the event included curation aesthetics, marketing strategies, community building, and economic survival and profit, the latter term unfortunately a rare occurrence in this world.  Over 40 MA CCI students attended, and many students united to organise the event, which was MC’ed by MA CCI students Samuel Hall and Alexander Morvaridi.

The flyer in this blog post was created by Samuel Hall, and the snapshots were taken by Sarah Kinney.

The MA CCI Popular Culture & Representation Research Group is already mulling over ideas for their spring event, which they promise will be even more elaborate and ambitious than this event. 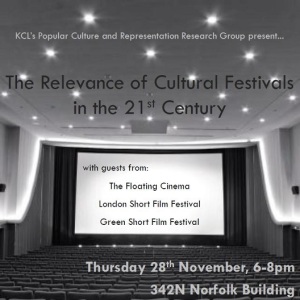