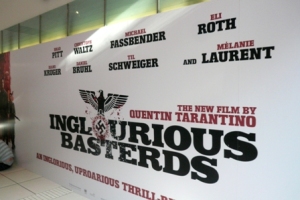 Tamara writes: “There’s nothing like a good war film to get the blood pumping and Tarantino’s highly anticipated World War II epic proves to be no exception. Brad Pitt stars as the US officer in charge of the Basterds, an elite group of soldiers who infiltrate occupied France in order to put an end to the Third Reich by, quite simply, assassinating Hitler. As if this wasn’t enough, a young cinema owner, a German movie star, and a sinister “Jew Hunter” (played by Christoph Waltz, who deserves an Oscar for his uncanny performance) are thrown into the mix, resulting in an adventure that will take your breath away, drop your jaw, and even have you rolling in the aisles from laughter. It is a classic Tarantino at his finest.

“It was quite a shock to be sharing the red carpet with the likes of Rhianna, Mickey Rourke, Neve Campbell, and the absolutely stunning Diane Kruger. Red carpets and drinks with celebs!? Who says working during the summer is dull?”

Lost in CCI also notes that 2007-8 MA CCI student Margaux Dourdin has a job at Focus. Margaux stayed on at Focus after completing an internship there.