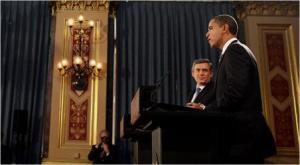 This morning CMCI lecturer Dr. Harvey G. Cohen appeared on the BBC World News TV channel with presenter Jonathan Charles, and offered commentary before and after Prime Minister Gordon Brown and President Barack Obama’s press conference at the Foreign Office. Cohen discussed the historical and political importance of the G20 summit, and the significance of Obama’s first major overseas trip as President.

Unfortunately, one cannot view the BBC World News station from inside the UK, so we have no web video to direct you to, but it was broadcast all over the world live and outdoors from the 5th floor balcony of the BBC’s Milbank studio, with Westminster Abbey and Big Ben in the background and security helicopters hovering overhead.

Luckily, no anarchist protesters took exception to Cohen’s views or wardrobe during the broadcast, and he has returned to his office relatively unscathed.