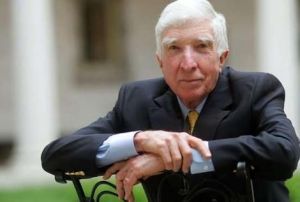 Just thought I would mention the passing of one of my favorite authors this week, John Updike, a prodigious writer of novels, short stories, non-fiction, poetry, and criticism, producing about a book a year for the last 55+ years. In my courses taught here at King’s College, I often focus on how culture reflects history, and vice versa. Perhaps no American writer is better suited to illustrate this concept in the last half-century.

For my money, his best books are the “Rabbit quartet,” 4 books published between 1960-1990 about Harry “Rabbit” Angstrom, one of the most indelible characters in American literature, right up there with Huckleberry Finn, Scarlet O’Hara, and Jay Gatsby. The best 2 books in the series are the last two (“Rabbit is Rich” and “Rabbit at Rest”), which both won the Pulitzer prize, but their richness can’t be fully appreciated without reading the first two. Another favorite of mine is “Couples,” from 1968, which portrayed how the sexual revolution really gained currency in America not when the 1960s hippies embraced it, but when it was picked up (so to speak!) by suburban middle-class married couples with children. I’ve always felt that Ang Lee’s excellent film “The Ice Storm” (1997) would not have been possible if not for the groundbreaking provided by Updike’s “Couples.” One last shout-out: Updike’s historical novel “In The Beauty of the Lilies” (1996).

It’s also interesting that Updike remained with the same publisher in America, Knopf, for over half a century, a rarity in today’s market-obsessed publishing industry. During the week of March 9th, in the Cultural Organisations and Creative Industries course that Dr. Hye-Kyung Lee and I teach here at MA CCI, I’ll be focusing on the publishing industry, and we will be discussing the history of the Knopf publishing company, and how they were able to sign so many of the most important and profitable American writers of the 20th-century.

I’ve only read about a dozen of more than 60 Updike books, so I have some catching up to do in the decades to come. Think I’ll start with his newest book, which I picked up last month here in London, the sequel to his famous “Witches of Eastwick” book, which was made into a film starring Jack Nicholson in 1987.