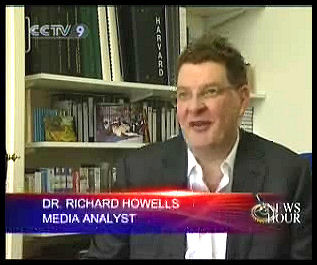 Dr Richard Howells was interviewed yesterday by Associated Press over the latest Princess Diana-related controversy, the broadcast by Channel Four of Diana: The Witnesses in the Tunnel, which had drawn protests from her sons.

Howells commented: “I think it’s important we all don’t get too journalistically po-faced about this. Yes, there is legitimate public, journalistic concern about Diana and the way she died. On the other hand, we have to be honest and say that a lot of people stand to make money and have made money out of Diana’s life and the story surrounding her death. She’s become a phenomenon and people are cashing in on that. But I don’t think the public are stupid. They will look at programs such as the Channel Four documentary and make their own mind up about whether this is legitimately journalistic or whether it’s simply a cash-in.”

The interview was widely syndicated, including to China’s CCTV (from which the screenshot above is taken) and Austrialia’s ABC.